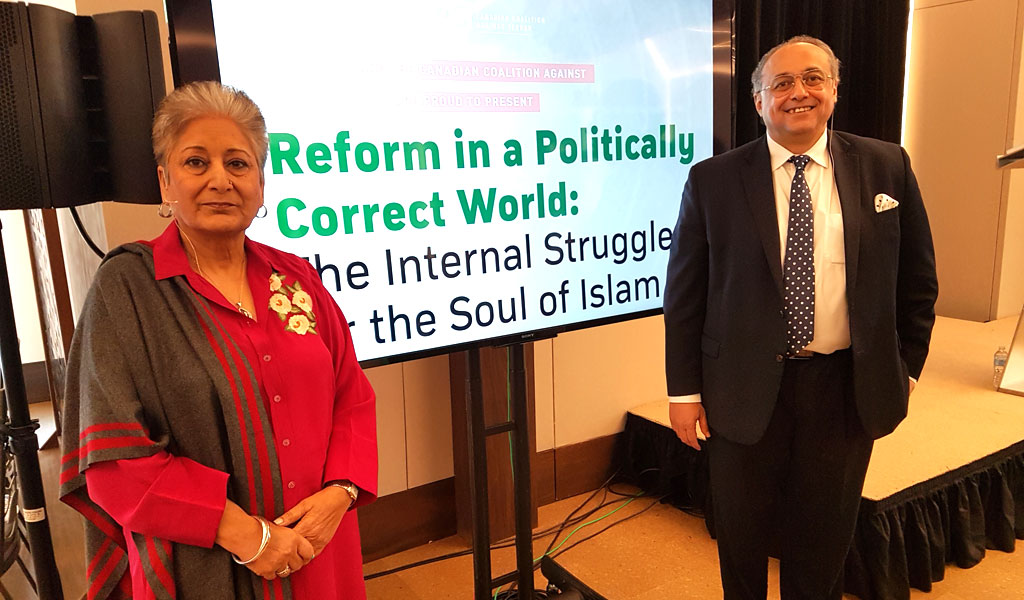 The event was a meeting of modern Muslim minds titled “Reform in a Politically Correct World.” I would be understating this to say that it was “mind blowing.”

Hosted by the JCC (Jewish Community Centre) and CCAT (Canadian Coalition Against Terrorism) with generous donors, it was attended by over 250 people who were informed, well read and curious.

However they had never experienced or heard anything like this.

Since 9/11, there have been many conferences held on progressive Islam and reform by moderate Muslims. Unfortunately their message and voices have been drowned out by the hysterical din of the Islamist narrative which attracts mainstream media like a bee to honey.

Added to these voices of jihad-ism, are the other Islamist culprits like Linda Sarsour, Siraj Wahhaj, CAIRand more promoting a victim ideology and recalls being at a group meeting in the early 1990s where they came up with the idea to use “Islamophobia” as a political weapon. “This loathsome term is nothing more than a thought-terminating cliche conceived in the bowels of Muslim think tanks for the purpose of beating down critics,” he said.”>Islamophobia supported by the regressive left and politically correct leaders.

In this atmosphere of denial, the gathering in Aspen was unique in every way, and something shifted on that day.

What made this meeting so different and electrifying?

To begin with, the participants came from diverse backgrounds and showed the spectrum of diversity within the Muslim world. Syrians, Yemenis, Bangladeshis, Egyptians and Pakistanis – all on one platform. Despite different opinions, varied organizations and nationalities, the binding factor for all of us was that we mutually embrace the values of a liberal democracy, gender equality, separation of mosque and state, secular governance and an urgent need to bring Muslims towards modernity and into the 21st Century while correctly interpreting their faith.

Each of the speakers brought honesty, passion and a desire to see change in the Muslim world. Therefore, there was no political correctness in the air. Just challenging and frank dialogue in which not everyone agreed. And that was the beauty of this meeting. We argued, debated and discussed the problems, then presented solutions to the best of our abilities.

Dr. Tawfik Hamid is an Islamic thinker, reformer and former Islamic extremist from Egypt, who was a member of the radical Islamist organization Jamaa Islamiya with Dr. Ayman Al-Zawahiri. He is the author of Inside Jihad: How Radical Islam Works; Why It Should Terrify Us; How to Defeat It. He spoke about the urgent need for theological change, which is why he authored a modern commentary on the Quran which has more than two million followers.

Dr. Hamid spoke about certain controversial lines from the Quran which were used to radicalize him and how to find an alternate understanding of those verses. In a question he was asked about how to prove that we are not indulging in taqiya (lying) he responded:

“Why would we put our lives at risk to lie? There is a test to see if Muslims are lying by asking them to publicly condemn the notions of blasphemy, apostasy, killing of infidels and honor-based violence. If they don’t do this, then yes they are lying – but we are not – as proven by our public criticism of these notions.”

Dr. Zuhdi Jasser is president and founder of the American Islamic Forum for Democracy (AIFD), co-founder of the Muslim Reform Movement (MRM) and a former vice-chair of the U.S. Commission on International Religious Freedom (USCIRF), which is appointed by the U.S. Senate. Author of A Battle for the Soul of Islam: An American Muslim Patriot’s fight to Save his Faith, he spoke of the importance and urgency of the reform movement.

Dr. Jasser mentioned that many celebrities who have faced jihadist attacks, like Ariana Grande, need to speak out against radicalization and support our movement as we can’t do this on our own. We are faced with the challenge of billions of petro-dollars supporting the jihadist movement and not enough support for our voices. Getting endorsements from famous voices would help our cause in a big way, but political correctness holds people back.

Dr. Elham Manea is a Yemeni-Swiss political scientist specializing in the Arab Middle East. A writer and human rights activist, she is well known for her writings promoting a humanistic Islam, fighting against extremism and Islamism, and defending universal human rights. Author of Women and Shari’a Law; The Impact of Legal Pluralism in the UK, Dr. Manea just authored a manuscript about non-violent extremism (waiting to be published). She showed the curriculum of the Muslim Brotherhood and how it use hate as a tool to empower the minds of young people and make them jihadists. She stressed the importance of focusing on non-violent extremists, which is the key ideology behind the jihadist agendas.

Professor Salim Mansur is a professor in the department of political science at the University of Western Ontario and the author of The Qur’an Problem and Islamism and Delectable Lie: a liberal repudiation of multiculturalism. Professor Mansur spoke from a historical perspective, educating the audience about the fact that most people focus on the Arab world, which is only a small part of the worldwide Muslim communities.

Dr. Mansur spoke about Indonesia, Bangladesh, India and Pakistan being large Muslim societies and how Muslims there live their lives and deal with issues (not just related to the Middle East crisis). He focused on the problems that Muslims have with modernity. Dr. Mansur was asked a question about anti-Semitism, and whether it’s related to an incident concerning a massacre of the Jews. He addressed this at length, explaining there is no historical evidence of this incident taking place and that this story was created many years after the death of Prophet Mohammad by the rulers of the time to promote their own agenda of division and hegemony.

After individual presentations, the panel came together for over an hour for Q&A. And what a lively discussion this was. It could have been endless. The questions were direct and pithy, because the audience had realized by this time we were there on a matter of global urgency addressing issues that will not go away by themselves — and they were in awe. Many of them said that this was the most educational forum they had ever attended, and that it must continue in other parts of North America.

What did we take away from this meeting?

My hope is that we will continue to have forums such as this including a variety of progressive Muslim voices to a point where our narrative will soon overtake the narrative of the extremists.

If this revolution in Aspen could happen, it can certainly be replicated all over North America.