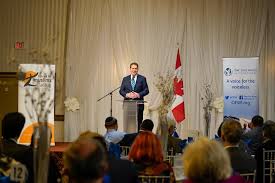 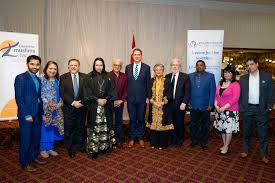 On May 29, 2019, Conservative Party Leader Andrew Scheer attended an Iftar Dinner hosted by Muslims Facing Tomorrow (MFT) and cosponsored by C-CAT and One Free World International. The event, attended by 225 people, was comprised primarily of members of Muslim communities from across the GTA. The Muslim attendees included members of the Sunni and Shia Pakistani communities, the Iranian Shia and Baha’i communities, the Ismaili and Ahmadiyya communities, the Sufi community, and the Uighur community. Members of various Christian denominations including Pakistani Christians and several Middle Eastern churches, as well as members of the Buddhist, Sikh, Jewish and Hindu communities also attended. For many of the participants, this would be their first experience in engaging directly with members of the other communities in attendance. The response from all sides has been effusive with multiple requests to hold similar events in the future. Those events are currently being planned.

C-CAT cofounder Maureen Basnicki (left) opened the evening and brought Ramadan greetings to the room from Canadian terror victims. She described her long relationship with MFT founders Sohail and Raheel Raza, in the battle against terrorism and extremism. Maureen then introduced Raheel (below right) who was the Iftar’s master of ceremonies.

Raheel Spoke about the significance of Ramadan, the importance of interfaith diplomacy in the fight against extremism, and her relationship with the Jewish community and the imperative of fighting antisemitism.

Below Raheel introduces Mr. Scheer to various Pakistani delights. Sitting to his left is Ambassador Naeem Hassan, a former Pakistani ambassador and Secretary General of SAARC. He served in many foreign countries and was also coordinator for the OIC-UN corporation agreement.

Rukiye Turdush (left), the representative from the East Turkistan Association of Canada, addressed the gathering regarding the plight of the Uighur community living under Chinese rule. An Uighur Imam (seen below on the right) led the prayers.

Reverend Zenji Nio (seen here talking to Andrew Scheer at the Iftar) is the only man in North America to officially be knighted as a Samurai and has an unusualCV. https://www.sempocenter.org/founder

“…The story of the Samurai and the Jews starts in 1940 with Zenji Nio’s role model, Sempo Sugihara, the Japanese diplomat in Lithuania who saved thousands of Jews during the Holocaust. When Jewish refugees came to him with obviously fraudulent papers from Curacao and other Dutch islands, seeing what was happening to Jews in Nazi occupied territories, he granted them visas to travel to Japan as that was the only way for them to get to safety in America. This is the legacy that Zenji Nio wishes to continue. A Samurai is someone who fights with honour for a righteous cause and does not stand idly by in the face of evil.

Nio first realized his calling during the Olympics. The man nicknamed “the Olympic Samurai” for his work teaching Samurai Buddhism to over 50 medalists, recalled being stunned by the level of anti-Semitism he saw at one of the world’s most supposedly uniting events. The massacre of Israeli athletes during the 1972 Munich games is the most famous incident, but there are many non-fatal instances of anti-Semitism at the Olympics.

…Anti-Semitism is on the rise in our society, and Zenji Nio says it keeps him up at night.

Because to him anti-Semitic events represent a manifestation of the cracks in our social fabric, and no matter who wins our current culture war, if they are a radical faction persecution will start with the Jews and then expand outwards.

This is why he stresses the need to acknowledge the distinct anti- Semitic nature of the Holocaust and bring together leaders of different communities in a public event. The goal of this Thursday’s memorial is to set a new

precedent. If 20 different faith leaders can get together in Toronto to mourn the victims of the Holocaust than they can do it in New York, Chicago, London, Madrid, etc.

…To him, one of the main causes of the Holocaust was the inaction of the population when things were getting bad, the old adage that evil only thrives when good men do nothing. So that is his commitment in the fight against hatred, never again will faith leaders sit cowardly on the sidelines while Jews are discriminated against, simply

happy that it isn’t them at the moment.

There is some “extreme hate” in today’s climate, and for Reverend Zenji Nio the solution is a combination of compassion, Bushido (Samurai code of chivalry) and

honor. And the sooner we get there, the better. Anti-Semitism is quickly becoming a popular political opinion, and people Jewish and non-Jewish are increasingly afraid to express themselves in public, and this needs to change if we as a society are ever to confront something serious. “ https://www.thepostmillennial.com/a-modern-samurais-war-on-anti-semitism/

for more on the Sempo Center for Human Rights and Holocaust Studies see: https://www.sempocenter.org/